A trip full of surprises and many first hand experiences one could have possibly never faced before. This is one episode I wanted to pen in my blog for a long long time now. So here it goes …

My trip to Mumbai

This is completely freaky and I still can’t believe I did this all. Had been to Mumbai for a business meeting and stayed one night at my friend – Janya’s place. He was then a bachelor and me married. He used to stay with two more friends from our teacher mani: Aanya and Vishal. I had met them all after a long long time which obviously warranted a long night party. That night we played poker and it was great fun!

As the party progressed into midnight, it was revealed to me that 2 weeks later they were embarking on a trip to Ladakh on their bikes (Royal Enfield Bullet). Janya already had a bullet, Vishal was buying one next day and Aanya planned to be a pillion rider. They were all really pumped up about it which also caught my excitement. They started talking about their meticulous  planning and showed me all the research and preparation that had gone into it. For Janya, it was the second time to Ladakh. First time he had been with other friends on a rented bike which he described as tough as hell.

The Act of Convincing Friends

I was so far not asked to join for two reasons:

While they were busy discussing amongst themselves, I started exploring options in my mind:

After much talking, I asked them if I could also join and get Sushma also along? The look on their faces was totally blank. “We don’t want it to be a family affair really” – spat came the answer. None of them knew Sushma well and thought she would throw tantrums at every nook and turn on the way jeopardising the fun in the entire trip. Above all they said – “how can you manage your kid?”.

I really tried hard to convince them and told them Sushma is not that kind and they would all have fun! I said we could leave our kid with her grand parents. In fact, I also suggested we take Yogya and his wife also along to keep Sushma company. 😉 All said and done, I was myself not sure how Sushma would take it? What my parents would say if we leave our kid behind? There were a lot of questions in my mind…

The team planned on traveling to Chandigarh in train with their bikes in parcel carriage and ride from there on. It was now 2:00AM deep in the night and I was hell bent on joining them. Janya finally said – “We will book your tickets right now. We will cancel them at a later point in time in case you decide not to come”. That was enough for me. We called up Yogya (lives in Bangalore) and narrated the plan. Yogya works for Eicher motors and also owns a Royal Enfield Thunderbird. He got quite excited but said it might be difficult convincing his wife – “She was not the adventurous type and had some backache problem too”. In the back of my mind, I started thinking that we couples could easily be traveling in an Innova while the bachelor party followed us on bikes.

Next day I travelled back to Belgaum with our train tickets booked for the trip.

I generally come across as a strong headed guy in the family. “If I say something I’d do it without fail” – is my reputation with them. Knowing how I am, my parents hardly argued and he said, “If he has decided, then he will go come what may. No point in arguing”. The one thing I didn’t tell them was that there was every chance we could be going on a bike. They were not OK for us to leave behind Ria – our daughter. Ria was too small for the adventure on a bike. It was written all over – a BIG NO! So we had to convince my in-laws who readily agreed to take good care of her. Phew! That was easy …

How I bought my Bullet?

The next few days I tried all my might and used all possible techniques to convince the boys gang to agree to go in an Innova rather than bikes. All my efforts went in vain. Moreover the boys party decided they would not allow us on the trip if do not come on a bike. With just 6 more days to go, I was left with no choice. I had to buy a bullet! Rather quickly … i.e. no time to book a new one and wait 6 months plus for delivery. hehe…

Here is where I say – “Friends are for keeps!”. Looking at my ethu, Janya readily took the lead and said he would buy a bike for me in Mumbai and parcel it with their bikes to Chandigarh. Within 2 days, he bought a second hand Black Electra (2010 model) which had just done 7,000 kms and was in smack condition. Someone was traveling abroad and wanted a quick sale. I got lucky!

Just one day before we were set to travel from Mumbai, Vishal dropped out for medical reasons in the family. We had no choice. Bikes were already in Chandigarh and we were now only four of us. Sushma couldn’t ride a bullet. And we had three of them. Aanya was a newbie. Even I was new to this. Forget about riding, I had not even seen how my bullet looks like? :-p

And the Journey Begins…

Finally, myself, Sushma, Aanya and Janya got onto the train.

Little did we know then that it was the start of an experience we would cherish all our lives!

Get ready! More experiences of the trip will follow suite… 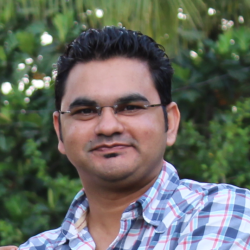 Ameet Patil
4 min read
Yes. Its been a long time since I wrote. Been